We recently interviewed one of our most inspiring guests Annie Ruth. She was born and raised in Southern California and has achieved so much in her lifetime from graduating from USC with honors, where she was a member of the Delta Gamma Sorority to completing her MBA from Pepperdine University. She is a computer forensics consultant on investigations, assisting the business sector. Plus, dear to our hearts at BlueSea, Annie is a world-renowned artist, and one of the founders of the Art of Rancho Program and a member of Mouth & Foot Painting Artists. 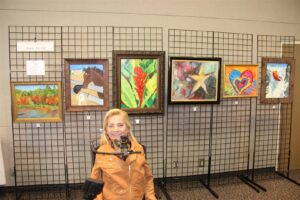 As a child, Annie loved athletics: skiing on snow and water, playing tennis, and exercising in gymnastics class. It was in the gym, when she was five years old, that Annie’s life changed dramatically. While trying to do a somersault off a balance beam, she landed on her neck and pinched her spine. The accident damaged her spinal cord and left her a C1–C2 Quadriplegic, which meant she would never again move her arms or legs. The accident made normal breathing impossible.

Finding Strength to Refuse to Give In or Give Up

Annie spent nine months at Rancho Los Amigos National Rehabilitation Center in Downey before it was possible to go home to Rancho Palos Verdes. Since then, she has become an inspiration to several generations of Rancho patients and staff, and to people everywhere because of the way she handled the accident that could have ended her life. But she refused to give in, or give up.

Annie worked with a Governance Committee for the state of California on the employment of people with disabilities, giving scholarships to companies that employed disabled people. She also served on the equipment advisory committee for the California Public Utilities Commission to provide accessible cell phones for the deaf, hard of hearing and physically challenged. She serves on the board of directors for the Blind Children’s Center and for the Fulfillment Fund, which gives scholarships to students in LAUSD. She brings inspiration and hope to us all!

How Art Became a Big Part of Life and Therapy

Annie says her involvement with art all began when a friend taught her how to paint. She came over to her house once a week for years. She said that she had the best time painting different subjects and she and her friend had the best time together. Then another friend got her involved with the Mouth & Foot Painting Artists association. She says it’s a great organization that gives painters like her the opportunity to sell their work in the form of greeting cards, calendars, prints and illustrated books. She says the association has really exploded and has grown tremendously. She says that art is so great for rehabilitation. Being able to create something in your mind, and then painting it gives purpose. So art is very therapeutic and healing. As one of the founders for the Art of Rancho Program, she says their art program and show has really grown over the years, and it’s doing great today although because of Covid they may have to postpone their art show which normally happens in November.

Annie says life is hard, and life is challenging. So she does not create negative paintings because enough of that going on in the world. She says, “So I’m trying to make them positive and colorful and joyful and happy.” She paints lots of landscapes and flowers. “And I love the ocean. I find it so peaceful and tranquil. And I love the colors of the ocean, it’s so beautiful. It’s very therapeutic,” said Annie. “And once I get in the zone, I forget about what’s going on in the world. I focus all my thoughts and energy on the image and I try to fix everything to make it beautiful and interesting.” She says the good thing about it is it gets personal but not everybody will like it. And hopefully some people do but she says she’s had had friends who say hey, I really like you, but I don’t like the painting. And that’s okay.

Annie takes on life with bravery and a sense of adventure. She says she just enjoys being a participant in all life has to offer. She has gone skydiving, hang gliding, paragliding, and white water rafting. But she has a lot more living to do. She says that driving a race car one day would be “a blast!” She’d like to try zip lining too.

She also loves music, plays, theater and sports. “I don’t mind being a spectator of life. So I really appreciate other people’s skills and abilities, their devotion to their art or sport. I’m a big fan of all that.”

Annie says she was honored to carry the torch for the 1984 Olympic Games. She said it was the best day ever. “It was the day before the Olympics started down in Torrance and there was so much positive energy. Everybody was so excited, and it was just great energy. I got to carry the torch for a mile. With my wheelchair, I went at such a mediocre speed so a lot of people ran with me. It was really fun that they jogged with me. We ran the mile together and it was just so much fun to be a part of the Olympics!”

She said that she admires all the athletes for their devotion and efforts to constantly improve and get better. “What they do is just incredible,” said Annie. She says she admires each and every athlete for participating in the Olympics, even if they don’t come in first, second or third. They’re doing their ultimate best and there’s so much hard work that we don’t see.

“So I just enjoy the Olympics so much and the energy is just very positive, people are very friendly and helpful at that time of year and it’s really a very special two weeks,” said Annie. She says she wishes we could carry out the Olympics throughout the year because it brings the world together at their best.

Annie is a huge Dodgers fan and got to become a part of Los Angeles Dodgers history. She and her family attended a home game during the time when Steve Garvey was in the worst slump of his career. He visited with her before the game and said, “I’m going to get a hit for you tonight.” He went five-for-five that game, which included two doubles and a Grand Slam home run. “This was the best day of Steve Garvey’s career,” said Annie. “He called me up the next day and told me I was his good luck charm and we’ve been friends ever since. He’s helped the center and has been our spokesperson every year to our golf tournament,” said Annie. She added that Steve Garvey is a great person and a great man with a great family.

Innovation to Help with Day-to-Day Life

Annie’s life has been made easier because of a special magnetic stylus that was custom-designed for her by a friend. She says she uses the stylus every day for her phone to communicate with friends and even play gin rummy using the magnetic card holder he also made for her that allows her to pick up the cards herself. She says she thinks it might be something that can help other people as well.

Annie comes across as a master ambassador of positivity so we asked her how she keeps her mental and emotional perspectives in proper sync. “Well, it’s a very interesting question because something I’ve learned over the years is that the physical is actually more mental than physical. And what I mean by that is, your mind controls your emotions and your attitude. So you can choose to be happy or angry or mad or sad. So, you know, if you choose to be happy, then you have a better attitude. And I think you can get through life better,” she said.

“It’s a lot harder and more stressful world. So I definitely choose positivity and happiness and try to do the best that I can. And I’m a big believer in God and pray to him to help me get through each day. And also I think that kindness really matters. We need lots of kindness in the world starting with how we interact with each other throughout the day,” said Annie. She says she thinks a lot of people are missing out because they don’t know how to deal with their own anger and frustration.

“It’s sometimes best to take a deep breath, brush it off and move forward,” says Annie. She’s also learned over the years that it’s really important to be patient. “You know, if you don’t need it now, or you know something is not that critical, then you’re going to be okay.” She said she is a little concerned about our new generation because they don’t seem to be too patient and want instant gratification.

She says she just wants people to be positive, happy and to enjoy their lives. And to enjoy the outdoors, nature, flowers, all the little things in life, which are often overlooked, yet so important to enjoy. She said we should always be grateful for what we have and not for all the things that we don’t have or haven’t done. You see people on Facebook where they get angry, sad or jealous when they see other people’s perfect lives. They think they’re perfect, but they’re not perfect. And so we need to maybe cut off Facebook and enjoy what’s around us and be grateful for what we do have, and not compare ourselves to others. 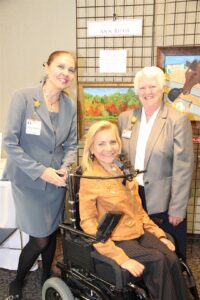 About the Author: admin

You can find out more about which cookies we are using or switch them off in settings.

Emails and phone numbers are utilized to establish a safe and protected communication with you.

This website uses cookies so that we can provide you with the best user experience possible. Cookie information is stored in your browser and performs functions such as recognizing you when you return to our website and helping our team to understand which sections of the website you find most interesting and useful.

Strictly Necessary Cookie should be enabled at all times so that we can save your preferences for cookie settings.

If you disable this cookie, we will not be able to save your preferences. This means that every time you visit this website you will need to enable or disable cookies again.